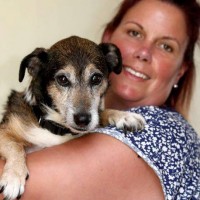 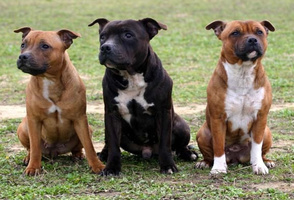 Please help stop the destruction of healthy animals; our shelters are full to bursting point with unwanted Staffordshire Bull Terrier dogs.  We are running a campaign to assist financially with the neutering of these dogs.

We are now offering these vouchers for £70 each male or £90 each female, for use at specified vets only.

Please email the clinic at clinic@rspcastortvalley.org.uk if you would like to apply for a neutering voucher.

Proof of Benefit must be shown when applying for a voucher.

This will be cheaper if taken at our clinic

We need your help to continue our vital animal welfare work locally.

Texts cost your standard network rate plus the amount you are donating.

An RSPCA volunteer who has completed 20 years of service with the animal welfare charity has been hailed a hero by her colleagues.

As treasurer and co-ordinator of the RSPCA’s Stort Valley branch, Marion Wellsman has overseen public donations, accounts and membership.

Colleague Marie Shaw said: “She has completed seven days a week of unpaid work for 20 years and I feel she deserves some recognition.

“It is a full-on job as we have to be on call all of the time. Marion has done so much for the town in her time and she should be celebrated.”

Mrs Wellsman, who lives in Harlow, worked as an accountant before joining the RSPCA after she retired in 1995.

She was part of the original core team that opened the branch’s animal clinic and advice centre in The Stow in 1997 and has worked hard to serve the community ever since.

Mrs Shaw added: “We currently have nine staff and are always on the lookout for more people to help.” 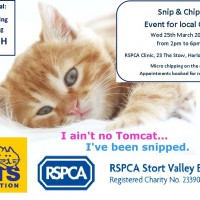 We asked people to bring their cats along to our clinic between 2 – 6pm on the day if they were not microchipped or neutered. They were microchipped on the day and an appointment made for them to be neutered at JAC Kews, Harlow, North Weald Vets or any Walton Lodge branch.

No appointment was necessary, people just brought £10 cash purr cat to our clinic at 23 The Stow, Harlow, CM20 3AN

We saw 51 cats! – It was a great success  and we hope to do this again sometime

If you missed this event please come along to our clinic during opening hours (see our clinic page for times) and get a neutering voucher for £10, microchips are £10 per cat or dog. 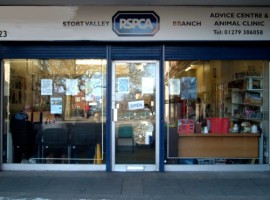